Part of collection of over 2500 glass and film negatives, photographic prints, and lantern slides taken by amateur Philadelphia photographer Marriott C. Morris (1863-1948). A member of a prominent Quaker family descended from Philadelphia merchant Anthony Morris, Morris was also a philanthropist, executor and trustee of estates, and founder of the Germantown Boys’ Club. Images include formal and candid portraits of the extended Morris family and friends, views from family travels to Bermuda, the Poconos, and the family summer homes "Avocado" and “Cedar Mer” in Sea Girt, New Jersey. The collection also features numerous photographs of Germantown, including several depicting the exterior and interior of the family residence the Deshler-Morris House (5442 Germantown Ave) and Boys’ Parlor building and excursions. 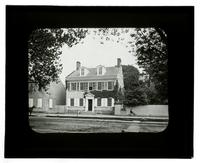 [Deshler-Morris House, 5442 Germantown Avenue]
Lantern slide showing the Deshler-Morris House at 5442 Germantown Avenue, a house with two chimneys and ivy climbing the walls. The house is surrounded by trees and a boy rides a bicycle on the sidewalk. The road in front of the house has trolley tracks running down the center. David Deshler built the original four-room summer cottage on this Germantown lot in 1752, adding the three-story front addition in 1772. The house was sold to Col. Isaac Franks in 1792 after Deshler’s death. President George Washington rented the home for the duration of the yellow fever epidemic of 1793 and the summer of 1794. Elliston and John Perot purchased the house in 1804, selling it to Elliston’s son-in-law Samuel B. Morris after his death in 1834. The house stayed in the possession of the Morris family for over a century, when Elliston P. Morris donated the house to the National Parks Service in 1948. The name was officially changed to the Germantown White House in 2009., Contains MCM's stamp. 8 x 10 Negative & Print (P.9895.2135, P.9895.1388), Digitization and cataloging has been made possible through the generosity of David Marriott Morris, Eleanor Rhoads Morris Cox, and William Perot Morris in memory of Marriott Canby Morris and his children: Elliston Perot Morris, Marriott Canby Morris Jr., and Janet Morris and in acknowledgment of his grandchildren: William Perot Morris, Eleanor Rhoads Morris Cox, Jonathan White Morris, and David Marriott Morris., Edited.