Friendship album compiled 1833-1856 by Philadelphia, middle-class, African American social activist Amy Matilda Cassey (1808-1856). Cassey was a member of the Philadelphia Female Antislavery Society, founder of the African American coeducation literary and scientific society the Gilbert Lyceum, and active in the temperance movement. Volume contains entries by men and women, most active in the anti-slavery movement, of original and transcribed poems, prose, and essays, and watercolors and pencil sketches. Topics range from abolitionism and slavery, to love and friendship, to female beauty and refinement, as well as motherhood, mortality, and death. Contributors include Frederick Douglass (1881-1895), William Lloyd Garrison (1805-1879), James McCune Smith (1813-1865), Lucy Stone (1818-1893), Sarah Forten Purvis (1814-1883), and Margaretta Forten (1815-1887). 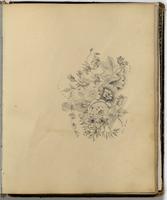 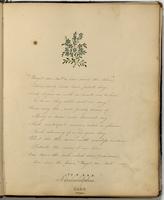 "Forget me not!" [graphic] / M.F.
Album page containing a drawing of a stem of blue forget-me-nots above a poem about remembrance. Shows the stem with mutiple flowers and leaves., Title from manuscript verse., Date from item., Probably by Margaretta or Mary Forten, civil rights activists and members of the multiracial Pennsylvania Female Anti-Slavery Society. The women were the daughters of Philadelphia African American entrepreneur and abolitionist James Forten and abolitionist Charlotte Vandine Forten, Contains lines of verse: Forget me not”!—how sweet the token,/ When early hours have faded long,/ And hopes as well as hearts are broken,/ To know they still exist in song!/ Thus, may the exile fondly dream of/ Many a dear and transie[n]t ray/ And watchful memory catch a gleam/ Each colouring of a by-gone day. What tho the wave with ceaseless motion/ Protracts the union of o’er lot:—/ Our Hope’s the rock, which stems Time’s ocean,/ Our Love’s the flower, “Forget Me Not.” Excerpt adapted from poem by William G. Simms Jr., “The ‘Forget Me Not,’” in Early Lays (Charleston, South Carolina: A. E. Miller, 1827)., Manuscript of "Philadelphia" outlined with dots., Manuscript numbers for year "1834" formed with dots., RVCDC, Description revised 2022., Access points revised 2022. 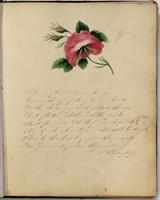 "I love a flower!" [graphic] / S.M. Douglass.
Album page containing a drawing of a wild pink rose above eight lines of allegorical verse about the beauty of flowers. Shows the rose with a stem, five green leaves surrounding the petals, and two buds., Title from manuscript verse., Date inferred from complementary entries in album., Contains eight lines of verse: I love a flower! it ever brings/ A warmth of feeling to my heart,/ Unlike those gay and gilded things/ That flatter coldly, coldly part./ But flowers! – Oh they are eloquent/ They speak when lips would still be dumb/ When by the hand of friendship sent,/ Her price interpreters they come., RVCDC, Description revised 2022., Access points revised 2022., Douglass, was an artist, prominent Quaker member of the Philadelphia African American elite community, educator, and anti-slavery activist. 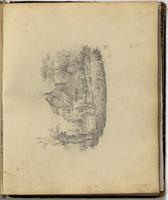 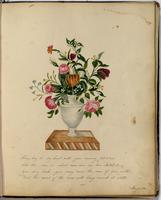 "Long long be thy heart with your memory fill'd..." [graphic] / Margaretta
Album page containing a drawing of a white vase of flowers on a square-shaped base and above a poem about memory and remembrance. Flowers depicted are of various kinds and include roses. They are long-stemmed, have leaves, and are in colors of pink, red, yellow, white and blue., Title from manuscript verse., Date inferred from complementary entries in album., Contains four lines of verse: Long, long be my heart with your memory fill’d!—/Like the vase in which roses have once been distill’d—/ You may break, you may ruin the vase if you will;/ But the scent of the roses will hang round it still., RVCDC, Description revised 2022., Access points revised 2022., Forten, was a civil rights activist, founding member of the multiracial Pennsylvania Female Anti-Slavery Society, and educator. She was the daughter of Philadelphia African American entrepreneur and abolitionist James Forten and abolitionist Charlotte Vandine Forten. 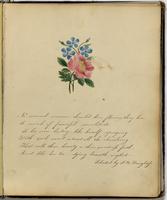 No marvel woman should love flowers... [graphic] / Selected by S.M. Douglass.
Album page containing a drawing of coupled red and blue flowers above six lines of allegorical verse about unappreciated beauty. Shows the red flower with fluffy stamens below three, five-petal blue flowers, possibly forget-me-nots. The flowers are also depicted with buds, leaves, and stems. The stem of the red flower contains thorns., Title from manuscript verse., Date inferred from complementary entries in album., Contains six lines of verse: No marvel woman should love flowers, they bear/ So much of fanciful similitude/ To her own history; like herself repaying/ With such sweet interest all the cherishing/ That calls their beauty or their sweetness forth;/ And like her too—dying beneath neglect. Verse from a poem by English writer Letitia Elizabeth Landon that was frequently published, including in the Ladies’ Miscellany (Salem, Mass., April 7, 1830)., RVCDC, Description revised 2022., Access points revised 2022., Douglass, was an artist, prominent Quaker member of the Philadelphia African American elite community, educator, and anti-slavery activist. 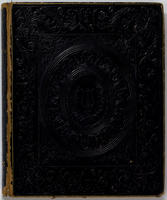 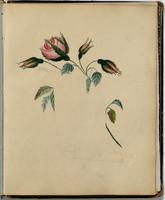 [Rose with open scroll] [graphic].
Album page containing an incomplete drawing of a spray of red rose and three rose buds behind a blank open scroll. The stems of the flowers are depicted with thorns. Image possibly corresponds to an 1849 entry written by African Methodist Episcopal Bishop Daniel Alexander Payne (1811-1893) about the death of his wife and daughter that began, “Just by the side of this Rose, there grew a Rose-bud perfectly formed and softly tinged with the brightest carmine ….” (verso of p.64-66)., Title supplied by cataloguer., Date estimated from span of dates of dated entries within album., Possibly by Amy Matilda Cassey., RVCDC, Description revised 2022., Access points revised 2022. 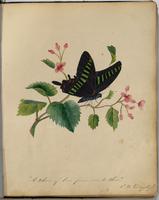 "A token of love from me, to thee" [graphic] / S.M. Douglass.
Album page containing a drawing of a black butterfly on a twig with pink flowers. Shows the butterfly with a black head, thorax, and abdomen and black wings with specks of green and red. The twig also contains several green leaves that fold up, fold down, and/or droop. The stem and branches of the twig are outlined with pink lines., Title from manuscript note., Date inferred from complementary entries in album., RVCDC, Description revised 2022., Access points revised 2022., Douglass, was an artist, prominent Quaker member of the Philadelphia African American elite community, educator, and anti-slavery activist. 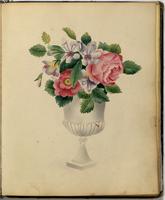 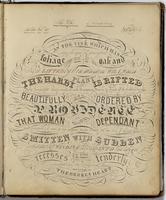 The Wife. By Washington Irving. [graphic] / P.H.R.
Album page containing an ornately calligraphed transcription of an excerpt from the Irving sketch in "The Sketch Book of Geoffery Crayon, Gent" about the wife as a helpmate to her husband. The sketch first published in 1816 was widely reprinted in periodicals during the 1830s, including in "The Ladies Garland" in 1838. Transcription contains multiple styles of handwriting and is enclosed within a border comrpised of swirls., Title from item., Date from item., Transcription of calligraphic text: AS THE VINE WHICH HAS/ long twined its graceful/foliage about the oak and/ been lifted by it in sunshine will when/ THE HARDY PLANT IS RIFTED/ By the thunderbolt cling round it with its caressing tendrils and bind up its shattered boughs so/BEAUTIFULLY so it is ORDERED BY/ PROVIDENCE/ THAT WOMAN who is the mere DEPENDENT/ And ornament of man in his happier hours should be his stay and solace when/ SMITTEN WITH SUDDEN/ calamity WINDING herself INTO the rugged/ recesses of his nature tenderly/ supporting the drooping head/ and binding up/ THE BROKEN HEART, RVCDC, Description revised 2022., Access points revised 2022., Reason, born in New York and one of the few known 19th-century Black engravers and lithographers, was also an anti-slavery and voting rights activist. He spent much of his career, which began when he was a teen in the 1830s in New York, before relocating to Cleveland in the late 1860s.